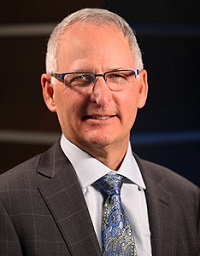 "I can't stress enough the value of my education, whose core philosophies have always helped guide me. Advancing the role of community pharmacy in healthcare was always my center of gravity, and what I gained at Purdue took me far beyond pharmacy and into the broader healthcare industry."

Greg Wasson is the Co-Founder and President of Wasson Enterprise, a family business in Chicago that leverages family member skill sets to create new businesses, invests in early stage startups, and advises current businesses. He is also the former president and chief executive officer of Walgreens Boots Alliance. Prior to that position, he served as President and Chief Executive Officer of Walgreen Co. and as a member of its Board of Directors from 2009 until his retirement in January 2015.

In 2016, Greg and his wife, Kim (BS 1981), founded Wasson Enterprise, a new family-based investment firm working with passionate and driven entrepreneurs. Its business model is based on serving as a resource for startups vs. investing alone—to connect, mentor, market, and commercialize its partners’ dreams into a business.

Greg serves on the Board of Directors of Verizon Communications, Inc. and is a member of its Audit Committee and HR Committee. In 2015, he became a board director and member of the Audit Committee and Technology Subcommittee of PNC Financial Services Group, Inc. He joined Health Care Service Corporation, the largest customer-owned health insurance, as a board director. In addition, he serves on the Board of Trustees of the Museum of Science and Industry and the board of World Business Chicago. He is a member of The Business Council, CEO Perspectives, The Economic Club of Chicago, The Commercial Club of Chicago, and Chicago Club. He received his BS in Pharmacy from Purdue University in 1981.