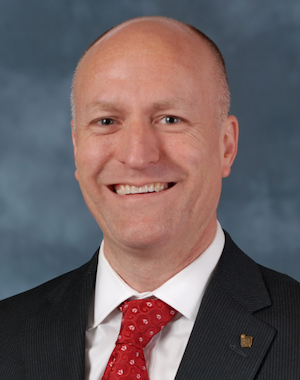 Brad Ulrich is a group vice president for Walgreen Co., the Retail USA division of Walgreens Boots Alliance, the global healthcare organization headquartered in Deerfield, Ill. He is responsible for leading Walgreens pharmacy and retail operations in the Eastern U.S.

Brad began his Walgreens career in 1996 as a pharmacy intern at the support office. He then worked as a pharmacist in Chicago, before transitioning to a front-end position as an executive assistant manager. Brad was quickly promoted to store manager, where he also managed several locations in the Chicago Loop district. In 2004, he was promoted to district manager in Tulsa, Oklahoma. While in Tulsa, he served as a “change agent” for the field reorganization initiative, as well acting as a district lead for the USA Drug acquisition. Brad then rejoined the support office in 2013 for a special assignment opportunity managing the implementation of customer and employee initiatives for the field. Following that, he assumed a lead role on our second field transformation effort, responsible for developing communication and field operations structure design.

In 2015, Brad was promoted to regional vice president for the New England region, overseeing stores in Maine, Massachusetts, New Hampshire, Rhode Island and Vermont. He then accepted a special assignment at the support office leading our Frontier work in early 2017. Later that year, his responsibilities expanded to include team member initiatives, labor and capacity planning, and operations communications. He was named to his current position in April 2018. He currently oversees the field operations in 4500+ retail pharmacy locations, including 155 Duane Reade stores in New York and New Jersey, 750 former Rite Aid locations, and 110,000 team members.

Brad earned a Bachelor of Science in Pharmacy degree from Purdue University in West Lafayette, Indiana.