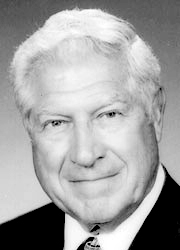 Dr. Don Newman was born in Chicago, Illinois and raised in the South Bend area as the son of a pharmacist. Don enrolled in the School of Pharmacy at Purdue University in 1941 where he participated on the football and track teams, setting a pole vault record in 1942. In April 1943, Don joined the Army Air Corps and became a B-17 Bomber Pilot Instructor in Columbus, Ohio. While in Columbus, he met and married Columbus native, Mary Louise. After two quarters at The Ohio State University, and the birth of their first of two girls, Don and Mary returned to West Lafayette to finish his pharmacy degree. After graduation, Don returned to the family drug store in South Bend and eight years later, he opened Newman's Pharmacy in Mishawaka, Indiana.

In 1957, Dr. Newman purchased a Howard DGA 15-P airplane and in 1959 he co-founded the Mishawaka Pilots Club and became the club's director. Very active in the community, Don ran for and was elected to a seat on the Penn-Harris-Madison School Board. This sparked his interest in politics and in 1973 he was appointed to the position of Director of the Washington Office of the Governor of Indiana.

After months of flying from his job in Washington to South Bend, Don sold the pharmacy and moved to Washington D.C. to concentrate on politics. In the role of Director of the Washington Office of the Governor, Don lobbied Congress, agencies, the White House, and was even involved with the Supreme Court. In 1979, following a long series of night classes, he received a law degree from Georgetown University.

In 1985, under the Reagan administration, Dr. Newman was appointed to the position of Under Secretary to the Secretary of Health and Human Services. His duties included Chief Operating Officer and Liaison to the Secretary of Health, the President, and Congress. Through his many meetings in the Oval Office, Dr. Newman formed a relationship with the then Vice President George Bush. In 1990, President Bush appointed him to the position of U.S. Minister to the International Civil Aviation Organization (ICAO). During his tenure at the ICAO, he served as an expert witness before House Aviation Subcommittee investigations and also played an instrumental part in banning smoking on international flights. At the conclusion of his term at ICAO in 1994, Dr. Newman joined the Washington D.C. law firm of Barrett and Schuler as Counselor. Soon thereafter, he accepted a position as a staff pharmacist and administrative officer with Cherokee Indian Hospital in Cherokee, North Carolina.

The diverse accomplishments of Dr. Newman have been recognized by many respected organizations. His list of awards include the IPA Bowl of Hygia Award, APhA's Hubert Humphrey Award, the NARD Dargavel Medal, Honorary doctorates from both Purdue and Long Island University, and the Outstanding Pharmacist/Lawyer Award by the American Pharmacy Law Association

In 1997, Don retired to Bellair, Florida, where he and his wife, Ginger, contribute their time and energies as volunteers each Thursday at the Clearwater Free Clinic. He has two daughters, Barbara - a pharmacist and graduate of Purdue, and Kathryn. He has four grandchildren, Mollie, Katie, Matthew, and Brittany.