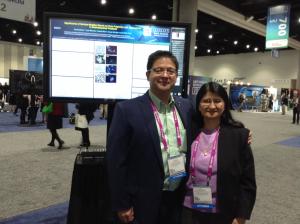 November 18, 2017 - During the American Association of Pharmaceutical Scientists (AAPS) Annual Meeting held in San Diego, CA, earlier this week, Dr. Tony Zhou, Assistant Professor of Industrial and Physical Pharmacy, received his second stage of Emerging Researcher Award from the International Pharmaceutical Excipients Council (IPEC) of the Americas Foundation. This two-year award will provide seed funding for the outstanding beginning scientist who demonstrated excellence and dedication to the area of pharmaceutical excipients. Dr. Zhou is the first awardee of the IPEC Emerging Researcher Award.

Carolina del Pilar Mora Guerrero, a PhD student from the National University of Columbia working under the direction of Dr. Claudia Mora in the Pharmacy Department, is currently a visiting scholar at Purdue University working with Dr. Rodolfo Pinal. Also during the AAPS Annual Meeting, she received a $1,500 Travelship Award in recognition of excellence in graduate research sponsored by The International Pharmaceutical Excipients Council (IPEC) of the Americas Foundation. “Our research project is focused on the characterization of chemically modified starches as a novel alternative for their use as excipients in pharmaceutical and cosmetic formulations,” says Carolina. “The work purpose was to investigate the properties of the modified starches, establishing the relationship between the degree of surface modification, and the resulting bulk properties of these materials. In addition, the emulsifying performance of modified starches was evaluated in emulsion systems based on caprylic/capric triglyceride and water.” Carolina also presented two posters—“Significance of Surface-Modified Starch on Flow Properties with Applications in Pharmaceutical Products” and “Evaluation of Modified Starches as Emulsifier Agents”—on her research with Dr. Pinal (pictured together at the conference).

Purdue Pharmacy alumnus Dr. Dale Wurster (PhD 1979) began his three-year term on the AAPS Board of Directors as president-elect, president, and immediate past president. Furthermore, the International Pharmaceutical Excipients Council Foundation presented him with the Ralph Shangraw Memorial Prize for his outstanding research contributions in the study of excipients or excipient-related technology over a number of years. Dr. Wurster is Professor in the Department of Pharmaceutical Sciences and Experimental Therapeutics at the University of Iowa College of Pharmacy.

The Purdue College of Pharmacy hosted an Alumni and Friends Reception on November 13, 2017, at the AAPS Annual Meeting. Guests gathered at the Marriott Marquis and Marina.  View our online gallery here.