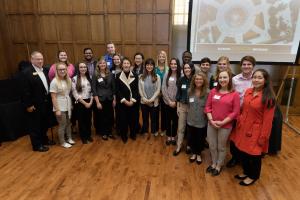 The Purdue University College of Pharmacy is excited to announce Jim and Jeannie Chaney have established a Charitable Remainder Trust, valued at $3.5M. This trust will create and activate a permanent endowment for Chaney Family Pharmacy Scholarships.

“Continuing to provide scholarships to our students is critical to our commitment to being the most affordable top ten pharmacy program in the nation.  Scholarships such as the ones provided by the Chaney Family impact our students in a major way, and they allow the College to be the national leader in lowest student debt for pharmacy graduates,” said College of Pharmacy Dean Eric Barker.

Previously, Jim and Jeannie (BSPHAR 1961) have given leadership gifts toward the proposed Pharmacy and Nursing Education Building, as well as several other College and campus-wide initiatives. The $8M commitment to expand the Chaney’s Pacesetter Endowment for Pharmacy in April 2018 was a marquee gift that propelled the College of Pharmacy to win the 2018 Purdue Day of Giving competition.

“The Pacesetter Endowment was established in a dual-purpose way, where the money would eventually help with a new building. Rather than let the money sit idle in a building fund, our earnings from the endowment have been able to support many Pharmacy students. Our original gift helped to inspire many other dual-purpose endowments for the College,” said Jeannie.

Jim added, “As the Pharmacy and Nursing Education Building has become a campus priority and the various dual-purpose endowments like ours will be used for the new building, we have become concerned about scholarship support for Pharmacy students declining. Utilizing a Charitable Remainder Trust was the perfect way to alleviate those concerns. We encourage other dual-purpose endowment donors and anyone else interested to connect with the development office to learn about these creative giving options.”

A Charitable Remainder Trust is a vehicle that generates a potential income stream for a donor, or other beneficiaries, with the remainder of the donated assets going to a charity or charities.

“There are no words to accurately describe how impactful the Chaney Family has been and continues to be. A donor legacy like the one Jeannie and Jim have created within the College and across the University is very rare. This gift is yet another one that generations of Pharmacy students will benefit from,” said Chief Development Officer Dan Bolsen.

The Chaney Family has supported the College and the University for over 40 years with a combined total of over $18.5M in philanthropic support.