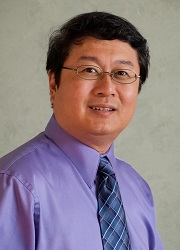 The Purdue College of Pharmacy is pleased to announce the appointment of Dr. Zhong-Yin Zhang as the new Head for the Department of Medicinal Chemistry and Molecular Pharmacology. Dr. Zhang is currently the Robert A. Harris Professor and Chairman of the Department of Biochemistry and Molecular Biology at the Indiana University School of Medicine in Indianapolis. He will also have a joint appointment in the Department of Chemistry and serve as the Director for the new Chemical Genomics Core Facility in the Center for Drug Discovery. Dr. Zhang's recruitment was part of the campus-wide Drug Discovery Big Move effort. His start date is January 4, 2016.

Dr. Zhang received his BS in Chemistry from Nankai University in Tianjin, China (1984) and his PhD in Biochemistry from Purdue University (1990). After a brief stint at the Upjohn Company, he completed his postdoctoral training at the University of Michigan. In 1994, he became Assistant Professor of Molecular Pharmacology at the Albert Einstein College of Medicine where he rose to the rank of Professor in 2002. He has been on the faculty of the Indiana University School of Medicine since 2005. His areas of research span the disciplines of chemistry and biology with an emphasis on the structure and function of protein tyrosine phosphatases (PTPs), PTP-mediated signaling mechanisms, mechanistic enzymology, and design and synthesis of PTP inhibitors as tool compounds to interrogate PTP function and as novel therapeutics for the treatment of cancer, diabetes and obesity, autoimmune disorders, and infectious diseases.

Dr. Zhang has successfully received numerous grants to fund his research, including several from the National Institutes of Health each over $1 million. He has been invited as a lecturer across the globe over the past two decades, has more than 240 publications, holds 17 patents, consults for several pharmaceutical companies, and is an internationally recognized authority in the field of PTPs. Among his awards and honors, Dr. Zhang was the recipient of a Chemistry Graduate Program Fellowship (1985), a Sinsheimer Scholar (1997), and an Irma T. Hirschl Career Scientist (1999). The Purdue College of Science presented him with an Outstanding Alumnus Award in 2006, and in 2009 he was selected as a Danny Thomas Lecturer by the St. Jude Children's Research Hospital in Memphis, Tennessee.