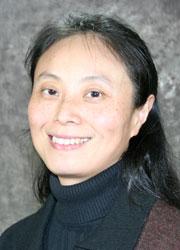 August 2017 - The Purdue College of Pharmacy is pleased to honor and recognize the outstanding research and scholarship generated by our faculty each month. This month we highlight Dr. Danzhou Yang, Associate Dean for Graduate Programs, Professor of Medicinal Chemistry and Molecular Pharmacology, and the Martha and Fred Borch Chair in Cancer Therapeutics.

“KRAS is a hot target for cancer therapeutics,” says Dr. Yang. Activating mutations on KRAS frequently occur in pancreatic, colorectal, and lung cancers. Suppression of KRAS expression leads to tumor regression. While many attempts have been made to target oncogenic KRAS protein to date, no clinically useful therapies exist. Most efforts to target KRAS have focused on the mutant KRAS protein. “Here we describe a novel approach that involves targeting KRAS at the DNA transcriptional level. The promoter of the KRAS gene can form unique DNA secondary structures: G-quadruplexes on the G-rich strand and i-motifs on the C-rich strand. We found that the Mid-region i-motif is the most stable and interacts with the transcription factor hnRNP K for KRAS transcriptional control. We identified a novel small molecule that destabilizes the interaction of hnRNP K with the Mid-region i-motif. This same compound stabilizes the G-quadruplexes formed in the KRAS gene promoter. ” The combined effect of the compound on the i-motif and the G-quadruplex DNA secondary structures leads to inhibition of KRAS gene expression.

“DNA secondary structures appear to be a potential target to regulate KRAS transcription,” she says. “It is very interesting that a small molecule could target both i-motif and G-quadruplex formed in the KRAS gene promoter. This dual i-motif/G-quadruplex-interactive compound presents a new mechanism for KRAS-based anticancer therapies.”