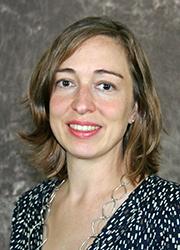 The Purdue College of Pharmacy is pleased to honor and recognize the outstanding research and scholarship generated by our faculty each month. This month we highlight Dr. Emily Dykhuizen, Assistant Professor of Medicinal Chemistry and Molecular Pharmacology. Dr. Dykhuizen’s recent publication, “Small Molecule Targeting of Specific BAF (mSWI/SNF) Complexes for HIV Latency Reversal”, can be read in Cell Chemical Biology (December 2018; DOI: 10.1016/j.chembiol.2018.08.004).

Individuals infected with HIV-1 take a cocktail of drugs that suppresses HIV-1 to undetectable levels and prevents progression to AIDS. This treatment must be maintained for life because of a small population of cells that have HIV-1 turned off by a set of proteins called epigenetic regulators. If patients go off their drugs, HIV-1 in these cells comes back on, infects other cells in the body, and causes AIDS. One of the epigenetic regulators that can keep HIV-1 off during drug treatment is called ARID1A, which is a subunit of a larger complex of proteins that is also required for normal cellular function. Dr. Dykhuizen and her team developed a molecule that inhibits ARID1A (but not the rest of the complex) to reverse HIV-1 latency without cellular toxicity. This presents a possible avenue to eliminate the population of cells with latent HIV-1 and provide a cure for HIV-1 infections.

“Human beings are very complex, in part because of thousands of epigenetic regulators that control which, when, and how genes are expressed. My lab is interested in figuring out which epigenetic regulators are involved in disease and how we can target them with drugs,” says Dr. Dykhuizen.

This has been a large collaborative project Dr. Dykhuizen started when she was still at Stanford and continued when she came to Purdue Pharmacy. Through an NIH grant, she worked with researchers at the Broad Institute to develop and perform the original screen for BAF inhibitors. Upon moving to Purdue, she worked with Christine Marian, a postdoc in the lab. They continued collaborating with chemists at the Broad Institute to validate and optimize the compounds. The team developed a collaboration with a virologist at Erasmus University, Tokameh Mahmoudi, who first identified BAF’s role in HIV latency. She and her graduate student performed all the HIV latency studies and identified this potential therapeutic use for the compounds. It was a team effort that has spanned about eight years.