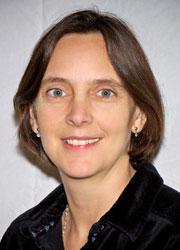 May 2017 - The Purdue College of Pharmacy is pleased to honor and recognize the outstanding research and scholarship generated by our faculty each month. This month we highlight Dr. Lynne Taylor, Retter Professor of Pharmacy, Department of Industrial and Physical Pharmacy. Dr. Taylor’s recent publication, “Insights into Nano- and Micron-Scale Phase Separation in Amorphous Solid Dispersions Using Fluorescence-Based Techniques in Combination with Solid State Nuclear Magnetic Resonance Spectroscopy”, can be read in Pharmaceutical Research (April 28, 2017; doi: 10.1007/s11095-017-2145-z). The work was completed in collaboration with graduate students Hitesh Purohit and Sugandha Saboo, as well as Matt Lamm, Amanda Mann, James Ormes, and Yongchao Su of Merck. The research was conducted in RHPH 418, at Merck, and by using the confocal microscope in RHPH 540.

Many drugs cannot be delivered using conventional tablet formulations because they have low aqueous solubility. Therefore, special formulation approaches are needed. Dispersing the drug at a molecular level in a hydrophilic polymer to form a miscible drug-polymer blend is a proven strategy to improve the delivery of poorly water soluble compounds. The formulation thus obtained is referred to as an amorphous solid dispersion. However, it is essential to evaluate the microstructure of the drug-polymer blends to ensure that the drug is homogeneously distributed in the polymer. Unfortunately, this is analytically challenging. The Taylor lab developed a new approach to characterize drug-polymer blends based on fluorescence spectroscopy. By adding fluorescent dyes that preferentially interact with either the drug or the polymer, and using confocal fluorescence microscopy, it was possible to image drug and polymer domains in the drug-polymer blend and they concluded that this particular drug and polymer did not mix well. To further evaluate the drug and polymer mixing, the team then added an environment sensitive dye to an organic solvent containing dissolved drug and polymer and produced spray dried particles. By measuring the fluorescence spectrum of the dye, it was determined that phase separation occurred even during spray drying (where the solvent is removed very rapidly) and the dye was interacting with a drug-rich phase. The industrial collaborators at Merck helped confirm these results by evaluating the spray dried particles with solid state nuclear magnetic resonance (NMR) spectroscopy. “Because our fluorescence method takes a few minutes for data collection, while the NMR method takes hours, this new approach is extremely promising for optimizing formulations of poorly water soluble drugs produced by techniques such as spray drying. This in turn is expected to lead to improved oral delivery of new drugs,” explains Dr. Taylor.

Miscibility between the drug and the polymer is one of the most important criteria that impacts the performance of an amorphous dispersion formulation. “The technique that we have developed can thus prove to be immensely useful as a high throughput screening method for polymer selection in formulation development because of the rapidity of sample analysis,” she says. “Additionally, the use of confocal imaging employing multiple fluorescent probes of different polarities provides formulation scientists with yet another sensitive and versatile analytical methodology to study microstructure of drug-polymer blends. It is particularly exciting to employ approaches widely used in the biological sciences, namely confocal fluorescence imaging, to visualize the heterogeneity in pharmaceutical formulations.”