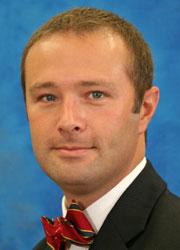 September 2017 - The Purdue College of Pharmacy is pleased to honor and recognize the outstanding research and scholarship generated by our faculty each month. This month we highlight Dr. Noll Campbell, Assistant Professor of Pharmacy Practice. Dr. Campbell’s recent publication, “Adherence and Tolerability of Alzheimer's Disease Medications: A Pragmatic Randomized Trial”, can be read in Journal of the American Geriatrics Society (2017; 65(7): 1497-1504). The study was conducted in collaboration with Drs. Malaz Boustani, Chris Callahan, Sujuan Gao, and Mr. Tony Perkins of the IU School of Medicine and the IU Center for Health Innovation and Implementation Science. Collaborators at IU Health, Eskenazi Health, Community Health Network, and St. Vincent Indianapolis were also critical in identifying and recruiting eligible participants.

Although there are no known cures for Alzheimer's disease or other dementias, drugs in this class may delay or slow the progression of symptoms in some individuals. Dr. Noll and his team have performed the first study conducted in the U.S. under real world conditions comparing patient adherence and tolerability to a class of drugs known as cholinesterase inhibitors. All three cholinesterase inhibitors approved by the Food and Drug Administration require titration, whereby patients work up from an initial dose to a target dose to receive full benefit, which according to the manufacturers can be achieved in 4 to 8 weeks. This study, however, found that only one-third ever achieved the target dose and only one-half of individuals were continuing to take them after 18 weeks.

"While these medications do not cure the disease, by not getting patients to target doses, we aren't optimizing the potential benefits these medications may provide," says Dr. Campbell. "Unlike the clinical trials conducted by drug companies for FDA approval, this study was conducted with participants who were taking an average of eight other medications—individuals who are sicker than those who typically participate in drug company trials. Having a better understanding of the population to whom the drugs are targeted may provide us with greater insight into how to increase benefits and reduce risk."

The 196 study participants were patients of memory practices in four large metropolitan Indianapolis healthcare systems, and there was no difference in demographic or clinical characteristics by drug which were randomly prescribed. During the study, just over half of all participants experienced a side effect which contributed to the decision to stop the medication. No variation was found in tolerability or adherence to the three drugs by sex, race, education, or age. Despite the high rate of side effects, the only reason for discontinuation that was different between the three drugs was the cost to the patient. "Physicians should be aware of the impact of side effects, many of which are shared with other medications that the patient is taking, on both the adherence to the medication and quality of life," comments Dr. Campbell. "While these drugs aren't the answer to Alzheimer disease, improving tolerability and adherence may also reduce the complications of Alzheimer’s disease."