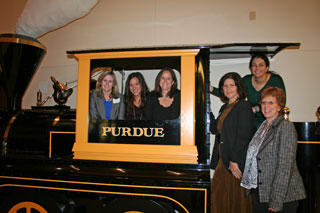 The members of Women for Purdue (WFP) are proud to have the ability and the resources to give to causes they believe in. They understand the power of philanthropy and are willing and eager to talk to others about it.

The program hosts small group meetings all over the nation. Groups meet formally only once. The women in attendance, invited because of their association with the University, consider the meaning of philanthropy, hear from other women who have championed specific causes, and they discuss money — something that quite possibly has been socially off limits in their lives.

They are inspired by each other, moved to action by stories of giving and of the impact of their gifts. They stay in touch with each other because they want to, because they have found kindred spirits in their passion to help others and in their love of Purdue.

Throughout history, women have shown a philanthropic spirit in giving of their time and talent. However, we most often have seen major financial gifts to causes and institutions coming from men, or sometimes from married couples or families. Only recently have women begun to realize their ability to use financial resources to affect change.

Many women are finding causes, programs, and areas that spark a passion. They are increasingly involved in charitable giving and helping to provide for the future.

WFP encourages and celebrates this increase in women’s philanthropy. 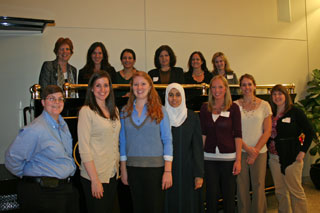 In August, 2008, Pharmacy Women for Purdue (PWFP) program was established as an extension of Women for Purdue to provide an opportunity for Pharmacy alumnae to support programs that advance women in pharmacy careers and celebrate the contributions that alumnae of the College have made, inside and outside of Purdue.

With input from alumnae and current female students in the College of Pharmacy, steering committee members recommended that the primary focus of the group would be fostering interaction between current female students and alumnae. Suggested topics included mentoring, learning about diverse career paths, professional development, the transition from student to working professional, balancing career and family, networking, career advancement, standing out in the field as a young professional, and communication skills. 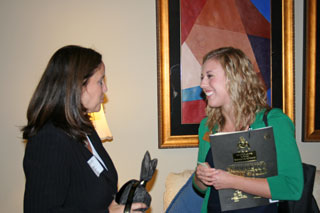 Spring Conference on Campus: The first PWFP event was held in April, 2009, concentrating on “Work/Family Life Balance" and "Mentoring/Career Advancement". Round table discussions with a group of PharmD, BSPS and graduate students covered topics such as career development, mentoring current students, and alumni networking. The second annual spring Pharmacy Women for Purdue event was conducted on March 5, 2010. The day-long conference began with registration followed by a panel discussion led by Pharmacy Women for Purdue steering committee members. Women Pharmacy students had the opportunity to interact with alumnae on a variety of topics including how to select a career focus, how to transition from one area of concentration to another, how to advance in your career, and how to set yourself apart in the pharmaceutical industry. The third annual Pharmacy Women for Purdue event was held on Friday, March 4, 2011. 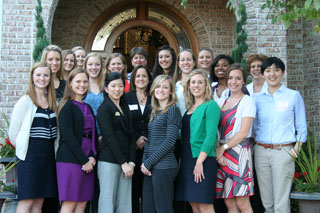 Fall Evening Gatherings: Feedback from the April 2009 sessions led to the concept of hosting informal evening gatherings for fourth professional students on rotations, with topics such the interview process and interviewing skills. The first of those sessions was held October 8, 2009, in the Indianapolis home of Valerie Gaylor (BS ‘79, PharmD ‘85). PharmD fourth year students who were on rotation in the Indianapolis area met and interacted with alumnae, who made informal presentations on preparing for upcoming job or residency interviews at our Career Fair and the ASHP Midyear meeting. Due to the success of this first gathering, the fall evening gatherings have continued to be held each year (on October 13, 2010 and October 5, 2011) at the home of Valerie Gaylor. The fall evening gatherings were expanded in 2012 to include the Lafayette area (Indianapolis, October 4, 2012 and West Lafayette, October 18, 2012).