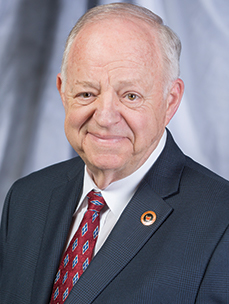 “This was achieved through my mentor and good friend, Dr. John Mennear. He skillfully taught me the vitals required for careful scientific research while demonstrating his personal joy in guiding my academic development. That strong sense of direction continues today through our regular in-depth discussions via telephone and email on a broad variety of health-related topics.”

Thomas Alvin Gossel received his BS in Pharmacy from Ohio Northern University (ONU) in 1963. After practicing community pharmacy for five years, he pursued graduate study at Purdue University, earning his MS (1970) and PhD (1972) degrees in Medicinal Chemistry and Molecular Pharmacology.

He joined the ONU faculty in 1972 as Chairman of the Department of Pharmacology and Biomedical Sciences, and Associate Dean. In 1993, he was appointed Dean of the ONU College of Pharmacy retiring in 2002. He presently holds the title Professor of Pharmacology Emeritus.

Dr. Gossel has presented 1,330 lectures to pharmacists and other health professionals in 47 states and Europe. He maintained a monthly column on OTC drugs in US Pharmacist for eigh-teen years, authored or co-authored 732 articles for pharmacists, and also authored three book chapters and seven books including Principles of Clinical Toxicology, a textbook for pharmacy students.

Tom and his wife, Phyllis, continue to call Ada, Ohio their home. They are richly blessed with two daughters, one son, seven grandchildren and two great-grandsons, all of whom are the delights of their lives.