Lyman D. Eaton II (BS 1974) and Joyce A. Eaton established the Eaton Entrepreneur of the Year Award for an alumnus/a of the College who has excelled in entrepreneurial activities during his/her career. The recipient is presented with an engraved plaque and recognized at a public function. 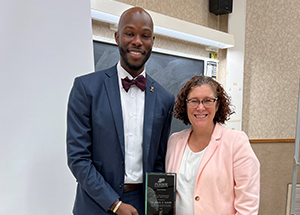 Ismail D. Badjie, a Gambian-born U.S citizen spent his early childhood in Belgium and New York as a son of a Gambian diplomat before returning home to complete his schooling. He returned to the U.S to continue his education earning a Bachelor’s Degree in Chemistry in 2008 from HBCU Tennessee State University (Nashville, TN) and then his Doctor of Pharmacy (PharmD, 2013) from Purdue University (Lafayette, Indiana USA).

Dr. Badjie started his professional career in North Carolina as a Licensed Pharmacist and has had over a decade of experience in the pharmacy industry serving in multiple capacities in community practice. He holds a Six-Sigma Green Belt in healthcare-focused on increasing efficiencies and outcomes in healthcare organizations. In his most recent role of Pharmacy manager for Community Pharmacy Walgreens Co., Dr. Badjie managed a 24-hour community pharmacy with a daily average of over 800 prescriptions, total yearly sales of $16 million dollars, and an inventory size as high as $1 million dollars. His community pharmacy specialization also includes medication therapy management, pharmaceutical compounding, HIV therapy, and Adult Immunizations.

Dr. Badjie transitioned to establish his Healthcare solutions company Innovarx Global Health (IGH) in 2015 where he currently serves as Founder and CEO. IGH focusses on leveraging technology to bridge the gap in access to quality healthcare solution opened their first franchise in The Gambia in December. The company uses a U.S style community Pharmacy as the cornerstone of a cyclical integrated health ecosystem designed to leverage technologies such as telemedicine, point-of-care diagnostics, electronic prescription processing, retail e-commerce and last-mile delivery of quality healthcare products and services in the most convenient way. A model rooted in continuity of care and preventative health services that not only increase access and affordability in the local market but has also expanded the market to include citizens living abroad who sponsor the care of loved ones in Sub-Saharan Africa.

Dr. Badjie currently lives in Charlotte, North Carolina with his wife Adama and 3 year old daughter Isha Haddy. He is passionate about athletics and remains very active in cross-fit, basketball and golf in his spare time. Ismail is also a member of Alpha Phi Alpha fraternity Inc and Phi Lambda Sigma.