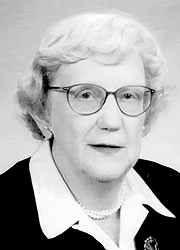 Gloria Francke received her BS in Pharmacy from Purdue University and began both her graduate studies at Purdue and a position as an instructor for one year. She then practiced pharmacy in Dillsboro, Indiana, for a year, followed by a two-year position as assistant to the chief pharmacist, University of Michigan Hospital, Ann Arbor. Shortly thereafter, she accepted a position with the American Society of Hospital Pharmacists and subsequently held various appointments including executive secretary, research associate, associate editor of the American Journal of Hospital Pharmacy, and acting director of the Department of Communications.

In 1967, Dr. Francke concurrently became clinical pharmacy coordinator, Veterans Administration Hospital, and assistant professor of clinical pharmacy, University of Cincinnati. During this time, she also earned a PharmD from Cincinnati. In 1971, her career took her to the Alcohol and Drug Dependence Service of the Veterans Administration, Washington, DC, where she served as Chicago, Program Evaluation Branch, until 1975 when she became director of the Pharmacy Intelligence Center with the American Pharmaceutical Association. During her tenure with the American Pharmaceutical Association, she served as staff liaison for APhA's task force on women in pharmacy (1980-81) and also served as chairperson of the Advisory Group to the Office of Women's Affairs at APhA. She retired from the American Pharmaceutical Association in 1986.

Dr. Francke has received commendations from the Veterans Administration and the Office for Drug Abuse Prevention in recognition of her many contributions to drug treatment programs In 1953, she received the Harvey A.K. Whitney Award of the American Society of Hospital Pharmacists. She has also been honored by the Texas Society of Hospital Pharmacists and received a Distinguished Alumnae Award from Purdue University in 1985. Her many years of service to the profession of pharmacy were recognized in 1987 when she was the first woman awarded the Joseph P. Remington Medal, the highest award that can be bestowed upon a pharmacist. In 1988, Dr. Francke was awarded an honorary doctorate degree from Purdue. Gloria passed away in 2008.