In the 1970s, initiatives were established to address racial diversity and achievement at Purdue University and within the College of Pharmacy, then known as the School of Pharmacy and Pharmacal Sciences. Richard “Dick” Weaver (BS 1970) was hired as Director of Minority Programs in 1972 with funds made possible through a three-year Special Projects Grant provided by Health and Human Services. A Special Health Opportunities Grant was then awarded for two consecutive three-year terms. The program, however, was unfortunately discontinued in 1981 when the grant ended.

It was during the early years of his tenure as Dean when Charles “Chip” Rutledge began integrating programs within the College to further the inclusion and cultural awareness of all students. He noticed that many of the students came from small towns in Indiana, and when they graduated they found employment as pharmacists in large cities. “There were very few minorities in these small towns, and yet the patient population served by the newly licensed pharmacists included a large number of minorities,” he recalls. “I felt that it was very important to not only graduate more pharmacists from under-represented minority populations, but also to increase the cultural awareness of the majority students.”

Rutledge began by forming a Minority Advocacy Committee of faculty and staff. He then established the Minority Advocacy Council of minority alumni, many of whom were participants in the program under Weaver’s directorship. It was through the suggestion of the Minority Advocacy Committee and Council that the Office of Minority Programs was created in 1992. The Program’s goal was to increase diversity and enhance the success and professional development of program participants. Proactive counseling, a demand for and commitment to excellence, as well as the creation of a supportive community were and continue to be fundamental elements. Awareness, understanding, and appreciation of cultural diversity have evolved over the years, so the name was changed from Minority to Multicultural to reflect the diversity of participants; however, the focus continues to be representation, retention, and respect for all in the pharmacy community.

Through the initiatives begun by both Weaver and Rutledge, great strides were made to advance diversity, inclusion, and cultural awareness. Rutledge attests the success is due largely to the dedication and hard work of Jackie Jimerson (former Director of Multicultural Programs), the Minority Advocacy Committee and Council, and the numerous students who participated in the program.

Several components, all optimized to support the specific needs of the target populations within the College of Pharmacy, have been implemented since the program’s inception. These initiatives include: 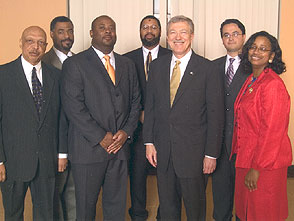 The Minority Advocacy Committee with
Dr. Martin Jiscke in 2005

All of the planning, leadership, initiatives, and professional support of the Office of Multicultural Programs lends itself to creating an environment that is inviting, nurturing, and productive. The Program is successful because of the commitment to building a community that values inclusiveness. In order to build such a community among students, faculty, staff, and family, the Purdue chapter of the Student National Pharmaceutical Association (SNPhA) began sponsoring an annual luncheon well before Multicultural Programs even existed. In 1997, as a means of increasing awareness and to provide an opportunity for all to experience the cultures within the minority program, the “Ethnic Luncheon” was born. It’s a way of saying thank you to the corporate supporters, family, alumni, faculty, and staff who assist and support program efforts and to recognize the academic achievements of Program Students. For many cultures, there is no better way than with food to experience and appreciate what each brings.